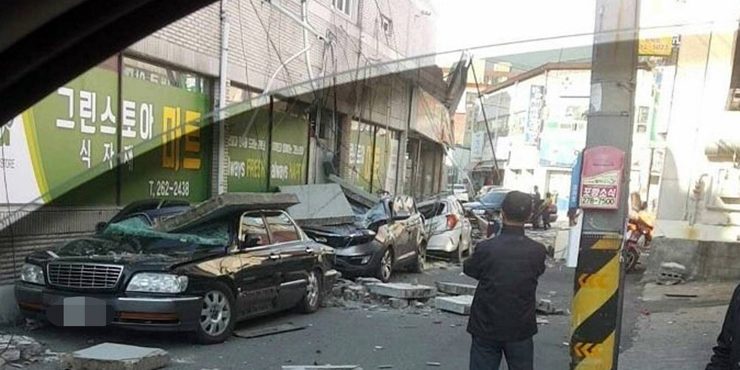 -5.4-magnitude earthquake struck Pohang at 2:29 p.m., preceded by minor quakes and followed by others including a 4.6-magnitude quake

-Seven sustained minor injuries; fire departments responded to 42 rescue calls; over 7,000 were made to the emergency hotline 911

A series of powerful earthquakes struck the southeastern city of Pohang, Wednesday, shaking many parts of the country, including Seoul nearly 300 kilometers away.

The first major quake ― 5.4 in magnitude ― struck Pohang at 2:29 p. m., the Korea Meteorological Administration (KMA) said. The epicenter was measured about nine kilometers north of Pohang and nine kilometers beneath the surface.

The quake was followed by aftershocks of lesser intensity, including a 3.6-magnitude one at 3:09 p.m. When a 4.6-magnitude quake occurred 8 kilometers north of the city at 4:49 p.m., residents across South Gyeongsang Province feared whether the tremors had yet to end. Fire departments in Changwon city 130 kilometers away from Pohang received dozens of calls from worried citizens.

Following the Pohang earthquake, the Nuclear Safety and Security Commission launched an emergency task force to monitor the safety of 13 nuclear reactors across the country’s southeastern region, around the cities of Busan, Ulsan and Gyeongju. As of Wednesday evening, the commission said no reactor suffered any damage from the earthquakes.

Seven people sustained minor injuries due to the earthquakes, two of whom were hospitalized. Fire departments in Pohang had responded to 42 rescue calls, while over 7,000 were made nationwide to the emergency hotline 911.

The earthquakes caused trains passing cities in the Gyeongsang provinces to slow down for minutes, delaying services for passengers.

The Ministry of the Interior and Safety dispatched six officials to Pohang to monitor and oversee the quake-struck zone.

Handong Global University students evacuated the campus as they watched walls of a building crumble.

Video footage residents sent to cable news network YTN showed objects on shelves falling to the floor following the quake. Some reported their portable devices were temporarily out of service.

The KMA said the 5.4-magnitude quake was preceded by two minor tremors, 2.2 and 2.6 in magnitude.

South Korea’s southeastern region is prone to earthquakes, with seven fault lines across North and South Gyeongsang provinces. In 2016, the North Gyeongsang Province city of Gyeongju experienced a magnitude-5.8 earthquake, Sep. 12. It was the biggest quake to have occurred since 1978.

Sourced by The Korea Times

This site uses Akismet to reduce spam. Learn how your comment data is processed.